The newspaper and yearbook staffs recently attended the JEA national convention in Chicago. Senior Kayla Moore wrote about the highlights of the trip. 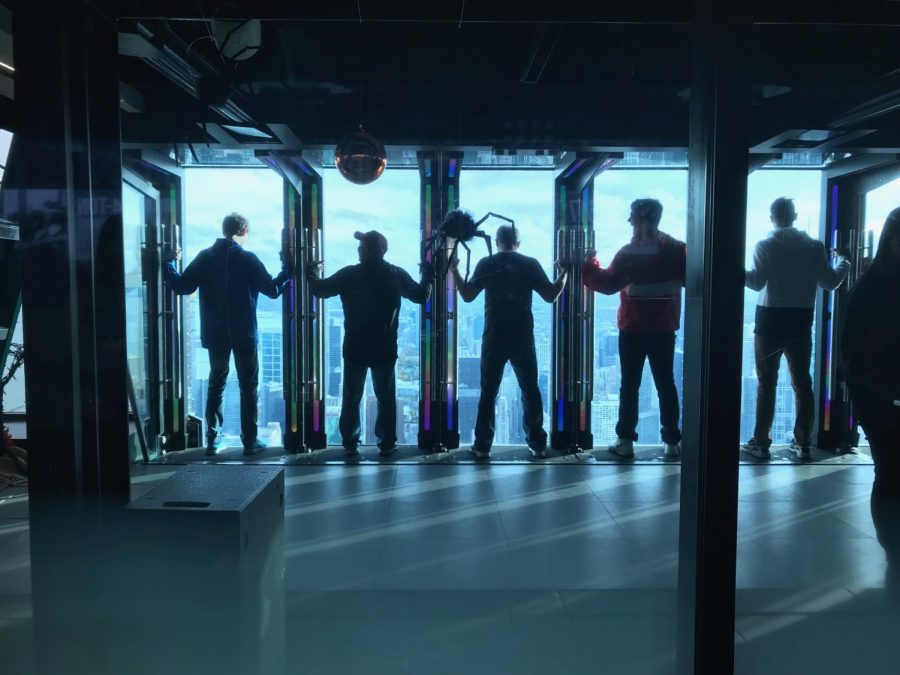 Some of the students participated in the tilt at the Hancock Building.

On November 1, Windsor High School’s publications staff met at the downtown Gateway train station at 5:45 am. The tired staff waited in the seats in the lobby with their suitcases, bags, and coats piled near, awaiting the announcement for Windsor High School to board the train. At 6:40 am, it was finally time to board and the noise of the wheels on our suitcases echoed throughout the station as we rolled to the escalators. It was still dark outside and the coolness of raindrops and bitter wind sprinkled over us. The staff split off into pairs, picked their seats, and sat their heavy suitcases in the overhead compartment; it was finally time to go to Chicago. Some people slept, some stayed awake talking, while others kept to themselves. We also had the option to walk to a different cart and purchase snacks and drinks to calm our hungry stomachs. Overall, the ride was peaceful. It would turn out to be much smoother than our trip home.

It was now daylight outside and we had made it to Chicago. The tall buildings and graffiti made us excited. For most students, this was their first time in Chicago. The train backed into the Chicago Union Station at 1:00 pm and we pulled our cases from above and went to the food court. Students went off into their location of choice and got a wide variety of things to consume. After eating, we started our walk to our hotel. The cold air immediately hit us, but that didn’t stop us from taking pictures right outside the train station. Teacher Cindi Maddock, who lived in Chicago for several years,  was our tour guide and one of four chaperones. We were all in awe as we walked past the Trump Hotel and channels that feed into the local Great Lake. Maddock pointed out many buildings and statues that we would enjoy learning about. We approached a tall building with four gold revolving doors.

“Why are we at this building?” many of us thought to ourselves. We were under the impression that we would be staying in a cheap hotel, not one that looks this fancy. When we walked in, we saw two staircases that overlooked the hotel lobby, a restaurant to our right, a Starbucks to our left, and the front desk was straight ahead. We were all amazed with how beautiful it was. We were given our room keys and pilled into elevators to go to our rooms on the tenth floor. Our rooms had two beds, a large window to see the beautiful view of the city, a TV, a desk, a bathroom with a long vanity, and a closest. We all met up after getting situated in our rooms to go to the Navy Pier.

At the pier, we saw many small shops, food, and a large room filled with a scenery of plants and benches which led out to the tall Ferris wheel and Lake Michigan. Some rode the Ferris wheel and others ventured out taking pictures and exploring shops. We then left the Navy Pier and went to dinner at the Spy House.

This restaurant wasn’t your typical restaurant. Upon entering we were greeted by two men, who introduced themselves as spies. We were standing in a room decorated like an office as we were asked for the secret password, which none of us had. In order to prove we weren’t bad guys, we had to perform silly acts. We all stood together and flapped our arms like birds while bobbing our heads up and down. We struck poses and laughed a lot. We were finally able to enter the actual restaurant after a door opened leading to a hidden staircase. Walking down the stairs we could hear clapping and confusion was brought among us. The restaurant had gadgets, words written on the walls, a magician, a photo booth, and screens hanging on the wall. After watching the screens, it came to our realization that everyone eating in the restaurant could watch us act like birds and do silly poses. At our tables we had a paper of different clues written on it and spy name tags. It was our job to find out what the secret password was. So, after taking our orders, we ran around the restaurant putting pieces together, and eventually we figured out the password. It was getting late but we still had a conference to attend at the convention center.

This convention was the reason that The Hoot and Harbor staff went to Chicago. Many schools from all over the country came together to learn how to better their yearbook and newspaper. The conference was long and we were drowsy, but we learned a lot from Pete Souza, the keynote speaker, who was the former Chief Official White House Photographer for U.S. Presidents Ronald Reagan and Barack Obama. We then walked back to our hotel after the conference and prepared for the next day.

On Friday, we headed to the conference classes. Each student was able to pick their own schedule for the day. The yearbook staff went to classes for photography and creating pages. The newspaper staff went to classes on writing and interviewing. During these classes, teachers from different schools across the United States taught us about how they do things in their classrooms and how we can improve on our work. It was very educational and both staffs took a lot of information from the conferences. We went to different classes until 1:00 pm and then we went out to eat on Michigan Avenue.

Many students chose to go to the well known restaurant, Shake Shack. Others chose restaurants surrounding Shake Shack like Panda Express or Taco Bell. After we ate, we went shopping to stores along Michigan Avenue. Stores that you’d typically see in Missouri grew in size. Forever 21 was two stories high and Urban Outfitters was three stories. After shopping, we went to the hotel and spent time bonding with each other and exploring our hotel more. There was a pool, a sauna, and a gym and we loved it. The architecture of the hotel pool, which was built in 1929, was unbelievably beautiful.

Later that afternoon, we went to the John Hancock building which also included the 360 Tilt. The building had 100 floors and when riding on the elevator our ears popped from the quick ascension. The view was amazing, you could see everything. Some of us decided to do the tilt. This is where you stand in a glass window and it tilts out of the building while you look at the ground below. It was nerve wracking and exciting.

“It was really interesting to experience the thrill of looking below us from a high point,” Alyssa Weisner said.

Afterwards we went to Lou Malnati’s for Chicago style pizza.

After eating, we explored Chicago until it was time to meet back up at the hotel.

On Saturday, we went back to the convention and attended more classes from 9:00 am to 1:00 pm. Afterwards, we went to Millennium Park and took pictures at “The Bean.”

“It wasn’t as cool as I expected it to be but my friends and I enjoyed taking pictures together in front of it,” Elisabeth Creed said.

We split off and went to restaurants surrounding the area and then met up at the hotel after we ate. At 6:00 pm we took a bus to the Chicago Bulls Game. On the bus, we met some girls from Florida who were also at the convention.

“It was interesting hearing about how different it is where they live,” Weisner said.

The stadium was large and some students took pictures with the dancers for the team. During the game, the crowd chanted and waved signs in the air to get featured on the jumbotron, including some of the staff. When the game was over we took a bus back to the hotel. The students who didn’t eat at the game left the hotel to go grab food.

“We didn’t have much time before curfew, so some of us ran down the street to Taco Bell to grab dinner and then had to run back to the hotel,”Abby Comia said.

Most of the staff met up at the pool and hung out to end our last night in Chicago.

On Sunday, we met in the hotel lobby at 5:50 am to catch the bus to the train station. We waited across the street from the hotel at the bus stop, waiting for what seemed like forever in the freezing cold weather. As we waited, the wind blew and we saw many people walking down the sidewalk. The bus was late, but we finally got to retain some warmth once it showed up.

The ride was quiet until we heard our bus driver yelling, “I have to go that way” at a traffic patrol person. After some communicating they let us go through until we reached another barrier. The roads we needed to be on were blocked off for a hot chocolate marathon. There was no way for the bus to get through, the traffic patrol man refused to make an exception, and our train was leaving soon. Eventually, there was nothing we could do except get off of the bus and run to the station. One by one, all of us ran off of the bus and took off down the street. Our rolling suitcases bumping into things, some flipping over, others grabbing each others to help out. We were almost there until we got the news, the train had left the station.

We were now stranded in Chicago with no plan and nowhere to go.

We sat in the train station trying to come up with a plan, we didn’t know if we would have to be split up or not. We finally got news that all of us would be able to get on the 1:30 pm  train. A weight lifted off of our shoulders as we were finally able to know that we had a way home. The trip was great, we experienced things we have never done before, we all gained friendships that didn’t exist previously, and we created memories that will last forever.