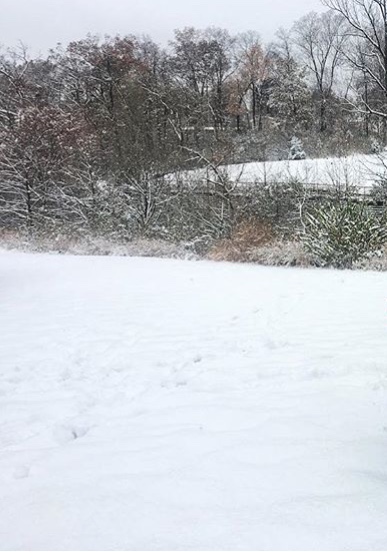 The entire St. Louis area was blanketed with snow.

It has been nearly five years since there has been a significant snowfall in the Imperial area on a school day. Recently, that all changed. On Monday, November 12, the weather forecast called for light snow around 1 pm.  This sparked joy in the students at Windsor High School. Later that day, the announcements came on over the intercom informing everyone that there would be an early dismissal at 2 pm. Everyone celebrated knowing that this was going to be a snow filled week.

Later that week, on Wednesday, November 14, the morning announcements had an interesting video clip in them. It consisted of winter snow falling and bacon sizzling on a skillet. At the end of the video appeared to be a picture of John Snow from the iconic series Game of Thrones, and the caption, “Winter is Coming.” Most of the faculty and few students who have had teacher and coach at Windsor High, John Leech, knew about the inside joke in the video clip. To explain, Leech always goes to the grocery store to buy bacon the night before a snowfall. This meant that the following day students and teachers in the Windsor C-1 School District would have a snow day.

When Leech was asked why he buys bacon before snow days, he said, “Is that really even a question? It’s bacon and should have its own food group.”

On the evening of the 14th, at approximately 8 pm, the snow started to fall. Joy sparked in the hearts of every student in Imperial. By 10 pm, Windsor students and staff received the “call”–an automated message telling everyone that school would be off the next day. According to several sources, this is the earliest Windsor has had a snow day in several years.

By the morning of the 15th, school had been called off for most schools in the Jefferson County and St. Louis areas. Most of the district was covered with over four inches of snow. That morning consisted of celebrating for many students at Windsor High School. Many had done so by sleeping in.

Sophomore Brandon Geitz said, “I slept until three in the afternoon.”

On Friday, November 16, students and staff members at Windsor unfortunately had to attend school. Even though it wasn’t the ideal way to end the week, everyone seemed to be able to make their way through the now melted six inches of snow that had fallen the day before.

Rumor has it, there will be quite a few more snow days for schools in eastern Missouri area the rest of this winter, in 2018.

Leech said, “I hope we have at least two more snow days this year.”